Five+ Years of Running and Fitness, Part One: The Sleep Factor

Insufficient sleep sabotages all of the benefits of a healthy diet and regular physical activity.

I've been trying to write up my five-year summary for several months now, and the analysis seems to keep getting bigger faster than I can finish it. So in an attempt to break the impasse, I'm publishing this review in several parts rather than all at once. This is Part One of a series that will review of the experiences, challenges, insights, frustrations and successes of the past year.

On July 27, 2013, I went for a run. A short, slow, shambling, on-and-off run punctuated by bouts of walking, to be sure - just 2.71 km at an average speed of 7.78 km/h - but a run nonetheless. It was the inauspicious start to a habit that has continued for more than five and a half years over 881 runs (as of this writing) spanning more than 10,200 kilometres and burning about a million calories.

Since I started running, I lost 80 pounds (and then gained 15), took up weight-lifting, dramatically changed my diet and transformed my daily approach to physical activity. The reason I have been successful at making these changes is that I didn't try to do them all at once. Instead, I've made a long series of small, incremental changes that have added up over time.

From the beginning of my fitness journey, a central component has been the collection and tracking of key measurables. That started with tracking runs in mid-2013 and expanded to daily stepcounts after I received a pedometer in late 2014.

Sadly, my pedometer - a free gift in the swag bag I received at a health conference - finally took that long walk into the sunset late last year. Happily, Santa was good to me and I received a Fitbit Charge 3 for Christmas - and the data has been a bonanza.

In addition to tracking daily steps, the Fitbit also tracks my heart rate, automatically logs physical activities and even monitors my sleep stages.

For the first time, I am able to quantify just how poorly I am sleeping - and it's alarming. The best evidence is that we should be getting seven to nine hours of sleep a night and that sleep deprivation, even minor, has a whole host of frightening health implications. To quote a 2017 paper by Medic et al. published in Nature and Science of Sleep:

Regular adequate sleep is one of the foundations of good health, along with a nutritious diet, regular physical activity and socioeconomic inclusion and stability. Insufficient sleep sabotages all of the benefits of the other determinants of health.

How am I doing? Not great.

Between December 26 and January 30, I have averaged just seven hours of sleep, which is at the very bottom edge of what is considered adequate.

But seven hours is my average, which means I'm getting less than that around half the time. Of the 36 nights I've tracked so far, I have gotten more than seven hours on just 18 nights and less than seven the other 20. I have only gotten the recommended eight hours on four nights, or 11.11 percent of the total. 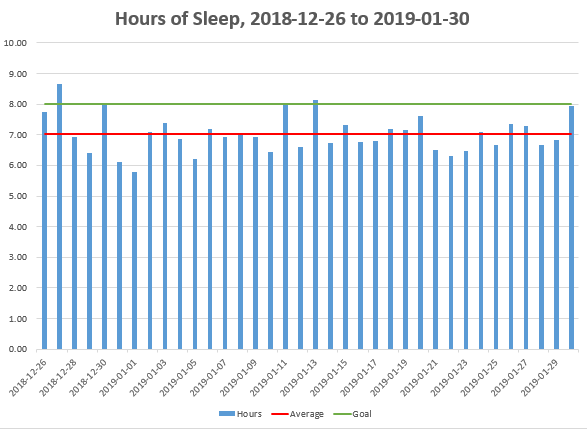 My good night's sleep is being squeezed in three ways:

Here's a fairly representative snapshot that shows all three constraints: on January 18, 2019, I slept a total of seven hours and 12 minutes, once you subtract the 23 times I woke up during the night, for a total of an hour and three minutes.

I strongly suspect that my poor sleeping habits remain a significant drag on my health and a major suspect in the challenge I've had losing that last ten pounds and taking my fitness to the next level.

So one of my major goals this year is to develop and maintain better sleep habits. I look forward to writing more about that in a subsequent post.