Five+ Years of Running and Fitness, Part Three: Around the Bay Again

I've signed up for the ATB 2019 30 km race and started my dedicated training long runs in the beginning of January.

I've been trying to write up my five-year summary for several months now, and the analysis seems to keep getting bigger faster than I can finish it. So in an attempt to break the impasse, I'm publishing this review in several parts rather than all at once. This is Part Three of a series that will review of the experiences, challenges, insights, frustrations and successes of the past year.

Last year was my fourth year running the 30 km Around the Bay Road Race, and like my third time, my training was a bit spotty. I missed several training long runs, and in fact I never actually managed to complete a full 30-km training run. The longest runs I did were around 28 km.

One particular training run was a disaster. On February 25, 2018, I got to around the halfway point in a 24 km long run and everything went to hell. My calves got sore, my knee tightened up, I got stitches in my side, and my energy just completely tanked.

I repeatedly had to stop running and just walk for a while. I slowly shambled home feeling sick to my stomach. When I got home, I was violently ill and then slept for 14 hours. Turns out I was coming down with a rotten bug.

Luckily, most of my long runs went better than this one.

However, I have found over the couple of years that I've been able to achieve better running performance with less actual running. I believe a significant factor has been my regular weight-lifting sessions at the fitness centre.

The research is clear: weight-lifting improves muscle strength, balance and posture, and makes for faster, stronger running with fewer injuries. I have had great success mitigating my knee problem with three days a week of weight-lifting.

Look, I'm not a powerlifter hardbody getting ripped or swole or anything like that. I'm just trying to focus on developing and maintaining a more stable core, a stronger lower back, more functional day-to-day strength and a smoother, more efficient running form. 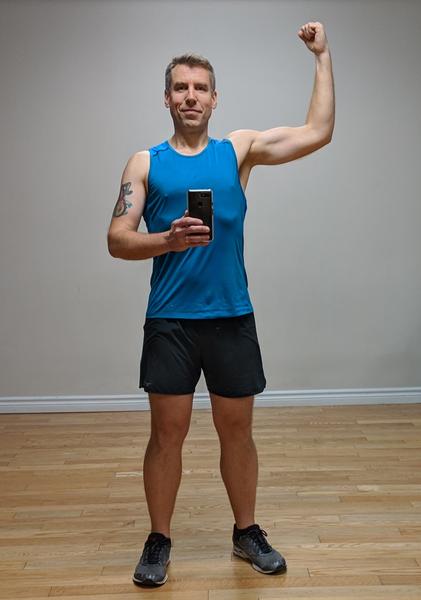 My goal for ATB 2018 was to finish the race in less than two hours and 50 minutes, my finishing time from 2017. Anything beyond that would be gravy. 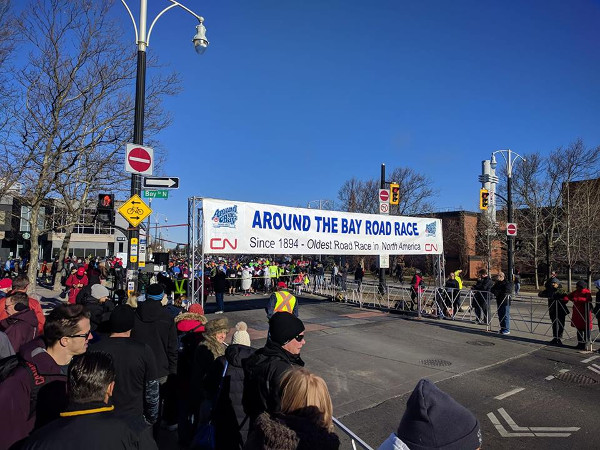 Around the Bay 2018 Starting Line

I decided to run without audible updates from my run tracking app and just go by feel, and I seemed to be making good time. Around the halfway mark I managed to catch up to the 2:45 Pace Bunny, so I just tracked him for the rest of the race.

For the first ten kilometres, I followed a breathing pattern of inhale four steps, exhale four steps. Every fourth set, I would inhale for five in order to switch the start of the cycle to my opposite foot. (This may seem silly, but as running coach Budd Coates points out, the evidence suggests that always inhaling from the same foot can lead to imbalance injuries.) Going up hills - the overpasses on Burlington Street/Nikola Tesla Parkway - I shifted to an inhale-for-three, exhale-for-three pattern to get more oxygen.

For the second ten kilometres, when my muscles were starting to get a bit tired and needed more oxygen, I switched to an inhale-for-four, exhale-for-three pattern to try and maintain a brisk pace. I kept my speed above 11 km/h but I was starting to feel like I wouldn't be able to maintain it for too much longer without digging into my capital reserves.

Sure enough, my pace started to flag during the last ten kilometres, the most difficult part of the course along North Shore Boulevard in Burlington. It contains three famously punishing hills: the long climb up to LaSalle Park, the slightly smaller hill just west of LaSalle Park, and the brutal Valley Inn Road hill coming up from Grindstone Creek.

By the last few kilometres - all downhill, thankfully, I was feeling gassed. For the kilometre after Valley Inn, my average speed fell to 10.4 km/h. Thankfully, the Pace Bunny was relentlessly upbeat and encouraging, and his optimism was infectious. We were still in good shape to finish in 2:45, despite running the next couple of kilometres in the high tens.

As always, I was buoyed and borne along by the encouragement of the thousands of friendly strangers who lined the course, plus beloved family members and friends who were on hand to cheer me on.

Around kilometre 29, a friend of mine ran out onto the course to pace me for a couple of minutes. He is an extraordinary runner, joyful and absurdly fast, and he gave me some excellent advice: "relax your body, open up your stride and pass ten or twenty people before the finish line."

Sure enough, that last kilometre I averaged 11.15 km/h and swept into the finish line feeling strong and confident.

In a chart of my average speed for each kilometre of the race, you can see it improve steadily for the first ten km, peter off over the second ten km, and then get increasingly erratic over the last ten km before finishing strong. 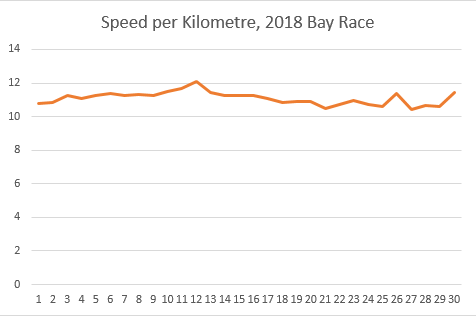 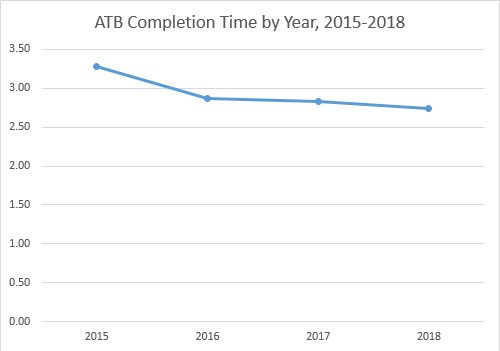 I've signed up for the ATB 2019 30 km race and started my dedicated training long runs in the beginning of January. I'm determined to get in at least a couple of 30 km training runs this time, and so far my weekend long runs are in the 21-23 km range.

On January 14, 2019 I bought a new pair of shoes. As always, I went with Mizuno Wave Riders, general-purpose neutral workhorse trainers that feel like they were custom-made specifically for my feet. 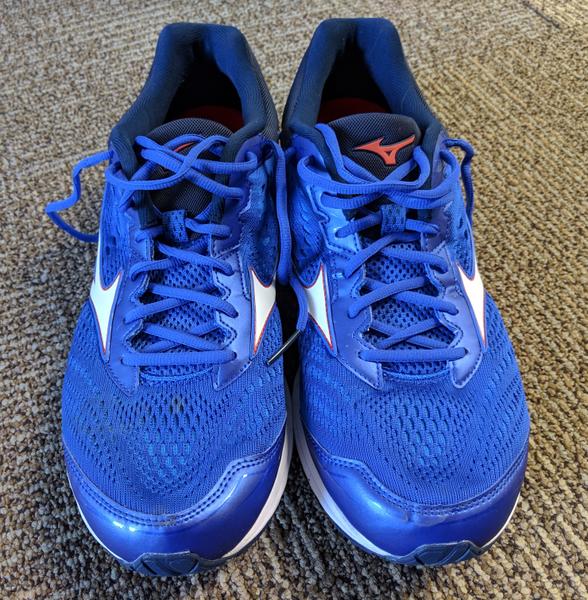 My only quibble with these shoes is that they don't seem to be quite as durable as previous versions of the shoe. I generally retire my shoes from running after 800 km and turn them into walking shoes, but the shoes that this pair replaced are already starting to tear in the mesh fabric around the toe box.

The past couple of winters I have became a bit wimpy about running outside in bad weather. This might have something to do with finally having access to dreadmills at the gym. But this week, with the polar vortex hanging over North America and temperatures dropping down to -25 Celsius, I've been spending more time on High Intensity Interval Training indoors rather than long, painful runs outside.

That said, here's my general guide for figuring out how to dress based on the temperature:

The hardest part is pushing myself out the door. The first five minutes are chilly, then I warm up between five and ten minutes and if I've dressed properly, I feel comfortable the rest of the run.

There are other ways to tweak my temperature. If I'm getting too warm, I can pull down the zipper on my coat, take off my hat and/or gloves, roll up my sleeves, and ease off the pace to produce less body heat. If I'm a bit too cold, I can put my had and glove back on, pull my zipper back up, and run harder to produce more body heat.

There's something really fun about getting to the end of a hard run on a really cold day, because steam pours off my body. As my friend Adrian put it a few years ago, "I feel like a wizard!"